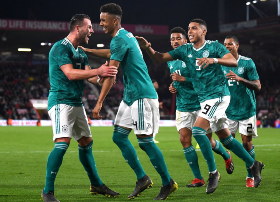 Manchester City striker Lukas Nmecha will represent Germany's national teams for the rest of his career after FIFA approved a one-time change of association.
Born in Hamburg 20 years ago to a Nigerian father and German mom, Nmecha was provisionally cap-tied to England before permanently pledging his international future to his country of birth.
Germany U21s coach Stefan Kuntz handed a debut to Nmecha when he introduced him on the hour mark against the Young Lions at the Vitality Stadium on Tuesday evening.
The German Football Association put in an appeal to FIFA for a change in allegiances and the Swiss-based organization approved the request few hours before the start of the match.
''It was quite an emotional situation. We first heard the good news when we arrived in the stadium, then I told Lukas and the others as we walked out onto the pitch for the inspection,'' Kuntz told DFB's official website.
''We were all so happy. Of course, it wasn’t an easy decision for Lukas to switch allegiance, but that speaks for the atmosphere of our U21s squad and its staff, who create a great and professional atmosphere in which the boys feel comfortable.
''And of course for the team, who made Lukas feel welcome in such a short space of time. Of course, he has helped himself because of his personality. ''
Nmecha helped England win the European U19 Championship in the summer of 2017, scoring in the semifinal against the Czech Republic as well as in the showpiece against Portugal.
Ifeanyi Emmanuel
Photo Credit : dfb.de