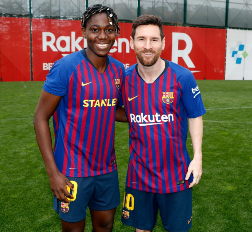 In three months time, the 2019  Women's World Cup will commence in France and Nigeria will carry Africa's hopes of reaching the semi-final stage of the competition for the first time.

The Super Falcons of Nigeria haven't gone past the quarter-final stage since 1999 but they will be hoping to improve their performance during the competition and surpass their past achievements.

If coach Thomas Dennerby's women must give a very good account of themselves in France, they will solely rely on in-form Barcelona star Asisat Oshoala for goals.

The 24-year-old striker , who is on loan from Chinese side Dalian Quanjian F.C, is in fine form for FC Barcelona Femeni since January and she will hope her newfound goalscoring form remains throughout the tournament.

Oshoala is a game changer and a deadly goalscorer, she is definitely one - if not the only player - of the players who can perfectly shoulder Nigeria's goalscoring burden in France.

Apart from her impressive goalscoring record for the West African side, the former Liverpool and Arsenal forward also has loads of experience when it comes to major international competitions and that makes her one of the players to count on.

Asisat has been with the Super Falcons since 2014 and she's been to the World Cup on one occasion, hence, she knows what to expect from fans and how to deliver under pressure.