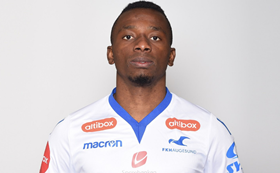 Norwegian Eliteserien club FK Haugesund and Nigerian defender Anthony Izuchukwu reached a mutual agreement to part ways, two days before the start of the 2019 season.
The 21-year-old center back arrived FK Haugesund from Golden Boot Soccer Academy in 2016 and is credited with 20 appearances for the club across all competitions.
Izuchukwu spent a portion of last season at First Division club FK Jerv, for whom he played seven games, scoring one goal.
Together with compatriot Ibrahim Shuaibu, Izuchukwu came on trial in January 2016 from GBS, and was offered a contract after impressing the coaches.
Meanwhile, Lillestrom confirmed during the week that young midfielder, Charles Ezeh has been loaned out to second-tier club HamKam until August 1, 2019.
The 21-year-old enjoyed a loan spell with Strømmen IF in the 2018 campaign.
Ifeanyi Emmanuel