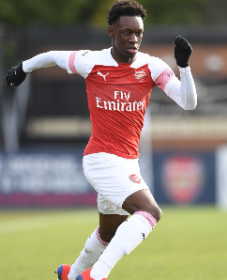 Red-hot Nigerian starlet, Folarin Balogun continued his impressive goalscoring form this season for Arsenal after netting for the U-18s in their 8-0 rout of Swansea at the Shenley Training Centre on Saturday.

The striker played the last seven minutes of the U-23s 1-0 win over West Ham yesterday evening but was still afforded a chance to add to his haul of 22 goals in all games for the club here and he did not disappoint.

After Sam Greenwood profited from a Ben Cottrell's assist to open the scoring in the ninth minute, Balogun was on hand to sweep home his 20th league goal for the U-18s after a neat lay back from Matt Smiths, doubling their lead in the process.

Defender Mazeed Ogungbo meanwhile, tested game action for the Gunners from the 56th minute when he was introduced for Zak Swanson.


The result ensured Arsenal maintained their spot at the top of the standings of the U-18 Premier League after 19 matches.
Emmanuel Chinaza
Photo Credit : arsenal.com