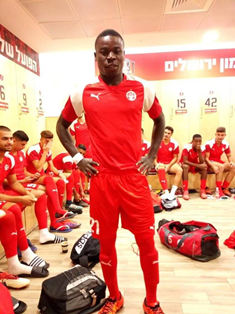 Teenage Nigerian forward, Godfrey Abonti Nieketien scored his 12th goal in 18 games for his club in Israel but his effort was not good enough as his side Ihud Bnei Baqa lost 3-1 away at Nazareth Telit.

In a chat with allnigeriasoccer.com from his base in Israel, the former Giwa FC Feeders team sensation who is however still playing for the Under-19 squad of his club in the Under-19 league in Israel said his priority is to put in more efforts and attract the attention of the coaches in the main squad and possible earn promotion into the main squad.

"The Israeli League is not that easy, football is fast paced here but I thank God almighty I have been able to adapt" he stated".

"My prayers now is to keep on doing well at the youth team and hope that the coaches in the main team will draft me into their plans " he concluded.

The 18-year-old Nieketien who is of Delta origin was born in Langtang South in Plateau State and had stints with Giwa FC Feeders in Jos and Federal Road Safety Corps FC of Abuja briefly last year before he was granted trials in Israel immediately after his 18th birthday.