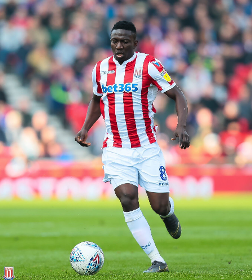 Oghenekaro Etebo continued his impressive showing for Stoke City as they were held to a goalless draw by Sheffield Wednesday in an EFL Championship clash at Bet365 Stadium on Saturday.

At the post-match press conference, the Owls boss, Steve Bruce inferred that the Nigeria international is too good to be playing in the Championship.

Allnigeriasoccer.com can exclusively report that Premier League side Watford attempted to sign Etebo last summer but he turned down a move because The Vicarage Stadium outfit did not guarantee him playing opportunities this season and Stoke offered him better wages.


''Where did Stoke find Peter Etebo?'' Bruce asked reporters. ''Feirense in Portugal, eh?''
The former Manchester United defender added : ''You come here and they have got good players, to be fair to them, very good players for this division and so considering the problems we had, we haven’t played anywhere near where we have been able to.''
Etebo was granted one-day leave by Stoke City after representing the national team in matches against Seychelles and Egypt.
Igho Kingsley
Photo Credit : stokecityfc.com