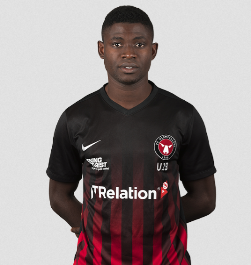 Danish club FC Midtjylland have confirmed that Nigerian defender Sunday Odeh has been ruled out of their UEFA Youth League quarterfinal clash against Porto on Tuesday, April 2.
FC Midtjylland's head coach Claus Therkildsen has omitted the fullback from the traveling party to Portugal due to injury.
The 19-year-old was not in the team that beat Manchester United 3-1 in the round of 16 but has made five appearances for The Wolves in the UEFA Youth League, logging 271 minutes.
Odeh has been inactive since his injury-enforced substitution after four minutes against Odense BK in the U19 Boys League on March 9.
Meanwhile, the lanky striker Jibril Abubakar, who proved a handful for the Manchester United defenders in the round of 16, has been included on the 20-man provisional roster against Porto.
FC Midtjylland, who are the first Danish club in history to advance to the last eight of the UYL, beat Bohemians (Republic of Ireland), Hamilton Academical (Scotland) and AS Roma (Italy) in the earlier rounds of the competition.
Igho Kingsley
Photo Credit : fcm.dk
Latest News