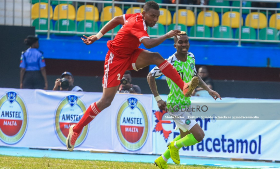 Everton loanee Henry Onyekuru has been named the fastest player in the Turkish Super Lig for the 2018-2019 season.
United Kingdom based sports analytics company OPTA recorded the speed clocked by the players in matches in the Turkish top flight, and the Galatasaray winger clocked 32 km/hr over 20 meters to place first.
Everton loaned out the Nigeria international to Galatasaray in the summer of 2018 after they had issues securing a work permit for him to play in the Premier League and he has impressed for the Turkish champions, scoring 11 goals in 24 league appearances and setting up 3 others.
The 21-year-old broke into the Super Eagles setup after the 2018 World Cup and has racked up eight appearances to date.
He celebrated his full debut for the senior national team by scoring in the recent 3-1 win against Seychelles in a 2019 Africa Cup of Nations qualifier.
Onyekuru was nominated for the Young Player of the Year at the NFF Awards but lost out to Villarreal's new kid on the block Samuel Chukwueze.
Ifeanyi Emmanuel