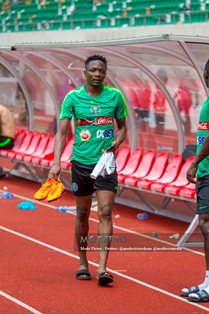 Nigeria manager Gernot Rohr has insisted that Ahmed Musa deserved to win the Nigeria Football Federation Player of the Year Award.
Musa, 26, saw off competition from Super Eagles teammates Alex Iwobi and Odion Ighalo to scoop the accolade, and Rohr has given two reasons why the Al Nassr winger is currently the best Nigerian player.
The former Leicester City star became the first Nigerian player in history to score a brace in two consecutive World Cups after netting a pair of goals against Iceland in Volgograd and helped the Super Eagles qualify for this summer's Africa Cup of Nations.
''I am very happy with the Nigeria’s Best Player of the Year award won by my player and team stand- in captain Ahmed Musa on Monday,'' Rohr told Sporting Life.

''I think it is very good for him. He has been one of our best players and also a good captain in the absence of Obi Mikel.

'I think Musa’s teammates in the Eagles should also share in this moment of joy since they have been providing quality support for him on and off the field of play in the Super Eagles.''
Chelsea loanee Victor Moses won the Player of the Year prize in the inaugural edition of the annual awards in 2018.
Igho Kingsley