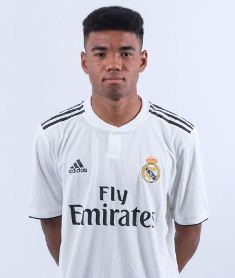 Real Madrid U19s crashed out of the UEFA Youth League on Wednesday following their shock 4-2 loss to Hoffenheim at  Dietmar-Hopp-Stadion (Sinsheim).
Real Madrid youth team coach, Daniel Algaba opted to set up his team in a 4-3-3 formation, with Marvin Akinlabi amongst the seven substitutes.
The home team led 2-0 inside the opening 12 minutes, thanks to goals from  Geschwill and Stojilković, before Real Madrid's Alberto halved the deficit on 18 minutes.
Two minutes after Hoffenhem scored their third goal, Akinlabi replaced Madrid's goalscorer in the 76th minute but his introduction did not change the visitors' fortunes.
The 19-year-old, who made his debut for Spain's U19 team in January, featured in every single game played by Real Madrid in this season's UEFA Youth League, seven in total, scoring one goal and providing an assist.
He is inching closer to making his competitive debut for Real Madrid Castilla in the Segunda División B - Grupo I, having made the match day squads for the games against UD Sanse and Unión Adarve.
Ifeanyi Emmanuel
Photo Credit : realmadrid.com