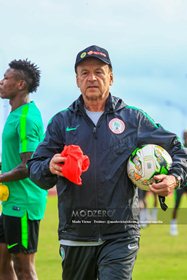 President of the Nigeria Football Federation, Melvin Amaju Pinnick, First Vice President, Seyi Akinwunmi and other dignitaries of the Abuja Glass House are expected to grace the Mees Palace Plateau State Under 13 League which commences in Jos this weekend.

In a chat with allnigeriasoccer.com in Jos, the Plateau State Capital, Media Consultant of Mees Palace Academy, Deji Ogeyingbo said no fewer than 800 kids would take part in the competition.

The competition is an initiative of Mees Palace and is also supported by the Plateau state Football Association.

Five matches would take center stage on Saturday at the Mees Palace Cathedral in Rayfield, culminating in a GALA Night afterwards.

Chairman of the Organizing Committee of the competition, Yerima Sapwada said that 20 teams with kids totaling 800 would participate in the competition that would run for at least six months.

Mr Sapwada explained that the competition would be played in a league format with each team playing home and away matches.
Mr Sapwada who also had a separate chat with allnigeriasoccer.com had this to say :

"The matches to be played would be home and away. Matches would be played at 10 different centers simultaneously every week.

"It is going to be a yearly competition and it was designed to make it easy for the scouts to see raw talent at the grassroots," he said.