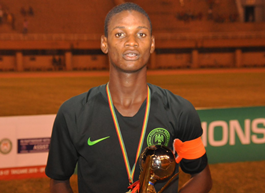 Allnigeriasoccer.com understands that the Nigeria Football Federation are weighing the pros and cons of including Golden Eaglets captain Samson Tijani in the 21-player squad for the 2019 Africa U17 Cup of Nations which begins next weekend in Tanzania.
As things stand, the defensive midfielder is eligible for the tournament after narrowly passing the most recent MRI test with a grade five but the Nigerian Federation are wary that he may not pass this same test when it is conducted in Tanzania next week.
The Federation don't want a repeat of the same mistake involving Sani Abacha and Saviour Johnson who were named on the roster for the regional tournament, only for CAF to axe the duo from the squad after they failed MRI tests conducted in Republic of Niger.
Samson Tijani is not just another player as he was the captain of the Golden Eaglets at the WAFU-UFOA Zone B qualifiers and won the Most Valuable Player award at the tournament.
It is believed that Tijani has close links with the Lagos State Football Association as he was recommended to the Golden Eaglets coaches by Liameed Gafar.
Ifeanyi Emmanuel