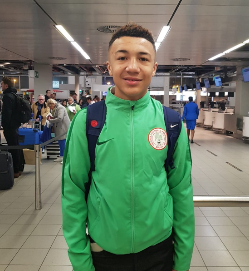 Allnigeriasoccer.com understands that Go Ahead Eagles wonderkid Lateef Omidiji has emerged as a huge doubt for the upcoming Africa U17 Cup of Nations.
The much-heralded striker was called up to train with the Golden Eaglets ahead of their trip to Tanzania but it appears he is not in the plans of coach Manu Garba, going by recent developments.
With less than six days left before the Golden Eaglets delegation jets off to East Africa, Omidiji has not been sighted training with the players, fueling speculation that he has been left out of the 21-man roster.
The American-born teen was a member of the Nigeria U15 squad that reached the final of the 2018 Africa Youth Games and was handed a maiden call-up to the Nigeria U17s back in February, along with Barcelona Escola's Kelechukwu Ebenezer Ibe-Torti.
An unnamed Canadian-based youngster was dropped from the roster several weeks ago simply because he did not pass the trials.
Five-time world champions Nigeria will face hosts Tanzania in the opening game of the U17 AFCON on Sunday, April 14.
Ifeanyi Emmanuel