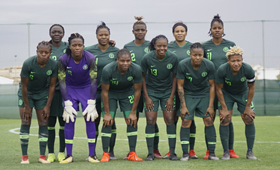 Allnigeriasoccer.com understands that two Spanish-based strikers in the shape of Asisat Oshoala and Antionette Oyedupe Payne will definitely not feature for the Super Falcons in their high profile friendly against Canada on Monday, April 8.
Barcelona star Oshoala has not trained with the African champions since their arrival in Spain as she is still recovering from a hamstring injury suffered against Atletico Madrid.
It is understood that the former Arsenal and Liverpool striker briefly met with her teammates upon their arrival in Spain before returning to Barcelona to continue her rehabilitation.
As for Toni Payne, Sevilla received her invitation letter late and have refused to release her to the Nigeria Football Federation because of their precarious league position.
Super Falcons manager Thomas Dennerby wanted to observe the former United States U17 international at the training camp with a view to including her on the roster for the 2019 Women's World Cup.

The Nigeria Football Federation have applied to FIFA for a one-time change of association and are confident that it will be approved before the World Cup.
Ifeanyi Emmanuel