...the complete Nigerian football portal
Subscribe
U17 AFCON: Chelsea Super Kid In Line To Be Handed Iconic No 10 Jersey Worn By Mikel, Nwakali, Oruma In The Past
Published: April 09, 2019 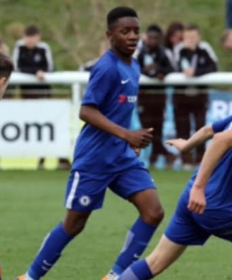 Allnigeriasoccer.com understands that Chelsea super kid Adrian Akande is in line to be the handed the number 10 jersey at the 2019 U17 Africa Cup of Nations which begins in Tanzania on Sunday, April 14.
In fact, Akande has been provisionally handed the shirt number previously worn with pride by some of the most talented Nigerian youngsters in the past, including John Obi Mikel, Wilson Oruma, Kelechi Iheanacho and Kelechi Nwakali.

The Golden Eaglets coaching staff announced the squad numbers at a team meeting on Monday and the Chelsea winger was assigned the number 10.
Chelsea legend Mikel played with the number 10 at the 2003 FIFA U17 World Cup while ex-Marseille midfielder Wilson Oruma, who was the top scorer of the 1993 edition with 6 goals, also wore the number 10.
Two Golden Ball winners in the shape of Leicester City's Kelechi Iheanacho and Arsenal's Kelechi Nwakali sported the number 10 jersey for the Golden Eaglets at the World Cup in 2013 and 2015 respectively.
Meanwhile, the Nigeria U17 coaches Manu Garba and Nduka Ugbade are pleased with the performance of Akande in training and informed him during the meeting.
Three players will be axed from the Golden Eaglets squad before their departure to Tanzania as from Wednesday, April 10.
Ifeanyi Emmanuel