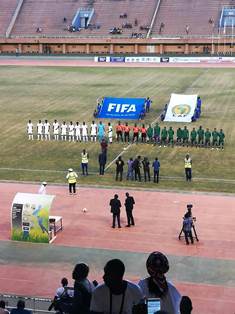 Allnigeriasoccer.com can confirm with certainty that Go Ahead Eagles youth-teamer Lateef Omidiji has been dropped from the Golden Eaglets roster ahead of their trip to Tanzania for the U17 Africa Cup of Nations.
The 'much-heralded' striker did not measure up to expectations during the training camp in Abuja and had to leave unceremoniously when it became crystal clear that he was surplus to requirements.
Omidiji was among the five foreign-based players that tried out with the Golden Eaglets team ahead of the tournament, the others being Bournemouth's Joseph Oluwabusola, Barcelona Escola's Kelechukwu Ebenezer Ibe-Torti, Chelsea's Adrian Akande and an unnamed player based in Canada.
Of the aforementioned players, only two have been included in Nigeria U17s provisional squad, Akande and Oluwabusola.
Omidiji and his camp had attempted to twist the arms of the Nigeria Football Federation hierarchy and coach Manu Garba to include the striker in the squad by using their relationship with the national team's kit manufacturers Nike but the Golden Eaglets coaching staff stood their ground.
The 21 Golden Eaglets players selected are expected to fly out of Abuja on Wednesday and will undergo fresh MRI scans upon their arrival in Tanzania.
Ifeanyi Emmanuel