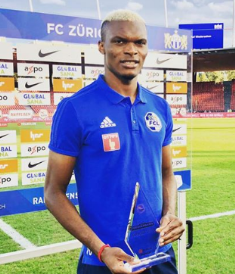 Catch up on the Nigeria-eligible players that got on the scoresheet for their European clubs in league matches on Wednesday, April 10.
New Molde signing Ohi Omoijuanfo scored for the second successive game in the Norwegian Eliteserien as Molde claimed a comprehensive 4-1 win against Valerenga at the Aker Stadion.
The one-cap Norway international and ex-Manchester City trialist opened the scoring in the sixth minute.
Following the win, Molde top the Eliteserien table with seven points from three matches, but have played one more game than Viking and Bodø / Glimt who both have a one hundred percent record.
Elsewhere, Blessing Eleke made it two goals in as many games by finding the net for Luzern in a 3-1 loss to Young Boys at the Swissporarena.
Seventeen minutes into the second half, the Luzern number 10 sent the goalkeeper the wrong way from the spot and halved the deficit in the process.
Eleke has been involved in 17 goals (14 goals, 3 assists) from 30 appearances across all competitions this season.
Ifeanyi Emmanuel