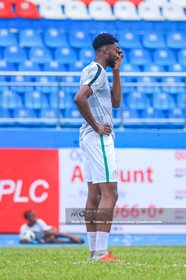 Semi Ajayi has been nominated for the Sky Bet Championship Player of the Month award for March.


The versatile defender has been recognised for his awe-inspiring performances for Rotherham United in the second tier of English Football, which saw him contribute five goals in five games during the past month.
Ajayi will be hoping to become the first Nigeria international to win the award since Sone Aluko (previously with Fulham) was given the accolade for October 2016.
The former Arsenal youth-teamer scored braces against Blackburn Rovers and Queen Park Rangers before getting another strike versus Norwich City.

Norwich's Emiliano Buendia, Pablo Hernandez of Leeds and Sheffield United's Jack O'Connell are the other players battling him for the prize.

"Ajayi's power and will to win were always suited to the transition from central defence to midfield. Less predictable were five goals in five games, three courtesy of prodigious leaps and flying headers, two immaculately timed low shots.",  The Millers website wrote on the Nigerian.


The winner will be announced on Friday 12th April.
Emmanuel Chinaza