...the complete Nigerian football portal
Subscribe
Odemwingie : They Laughed At Me In Russia When I Said I Was Going To Play For Nigeria
Published: April 12, 2019 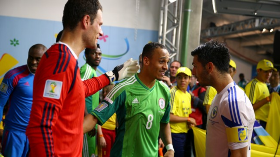 Former Lokomotiv Moscow striker Peter Odemwingie has stated that some people in Russia doubted his ability when he revealed that he was going to represent the Nigeria National Team in future.
Born in Tashkent, Soviet Union to a Nigerian father and Russian mother, Odemwingie spent his formative years as a footballer with the youth teams of KAMAZ and CSKA Moscow before joining Bendel Insurance.
''Your dream, when you are young, you voice your dreams out and people laugh of course and in 1996, Nigeria became Olympic champions in Atlanta, I said one day I'm going to play for Nigeria,'' Odemwingie told FIFA TV.

''It was in Russia, and they looked at me, laughing, and said ''You will never get to that level''.
Odemwingie became the oldest player in history to score for the Super Eagles at the World Cup when he found the net against Bosnia aged 32 years, 11 months and 6 days.
''When the goal goes in in the World Cup, I remember how my family was, how everybody was in Brazil, 2014.

''I wanted to give the country that feeling. So when I scored in Brazil and it was 1-0 and we won so that was the time I felt ''Yes, I have done something big'', and every time I want to feel something positive.
''I remember that day and what I gave to people''.
Igho Kingsley
Photo Credit : fifa.com