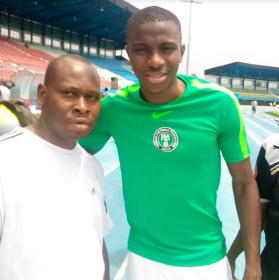 Nigeria international Victor Osimhen has sensationally warned potential group opponents at the 2019 Africa Cup of Nations that the Super Eagles are not perturbed  by their threats and are looking forward to a fourth AFCON title.

Speaking exclusively with allnigeriasoccer.com, the Sporting Charleroi striker who is on loan from German Bundesliga side Wolfsburg  was confident that the Eagles will surmount any obstacles as the Confederation of Africa Football conduct the group stage draws for the tournament  on Friday evening, 7pm Nigerian time.

"For me, I don't think we want to avoid any country in the draws," Osimhen stated.

"We have to play any team that comes our way to win the tournament which is our target. We are not afraid of any team that we get in the draws," the former U-17 World Cup star who holds the record of most goals scored by a player at the U17 World Cup with 10 goals at Chile 2015 told allnigeriasoccer.com.

On being able to make the Eagles AFCON squad Osimhen said:

"It's very difficult to be in the Super Eagles because we have so many good players doing so well for their clubs.


"A striker like Odion Ighalo has been an inspiration for me. He speaks with me all the time and I have learned a lot from him.
''He's an experienced striker and an important player in the team. At Wolfsburg I didn't have a great time and a few people wrote me off but I thank God things are looking good now," Osimhen who has scored 12 league goals in 25 appearances in the Belgian Pro League concluded.
Nigeria are in pot 1 of the draw with Egypt, Cameroon, Morocco, Senegal and Tunisia.