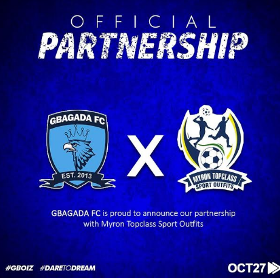 Lagos based Nationwide league side Gbagada Football club have confirmed that they have partnered Nigeria's leading Sports management firm, Myron Topclass Sport Outfits.
In a club statement, the Vice Chairman of Gbagada FC Mr Akinyelu Abisoye harped on the importance of sealing a deal with Myron Topclass Sport Outfits due to their track records and antecedents in the football business.
Via their Twitter handle, the club said "We are delighted to announce our partnership with @myron_sports as they will be on board as our Professional players Liaison and representative in terms of marketing locally and globally.

Myron Topclass Sport Outfits on their own path described the deal as one with a partner in progress, adding that it was a delight to seal a deal with a club that has an enviable structure.

The principal Officer of the Outfits, Mr Eddie Iseri Ogbemudia said " It was a deal too beautiful to decline considering the fact that Gbagada FC have turned role models to some clubs in terms of branding and organization as a whole, we are optimistic that this partnership will work in the favour of the two parties and Nigerian Football as a whole".

The deal is expected to run for two years and could be extended based on subsequent agreements.

Coach Felix Ifeanyi Nwosu and Coach Bob Akren are amongst the tacticians under the management of Myron Topclass Sport Outfits.