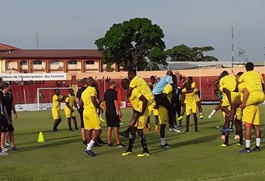 Finally, the balls have been drawn from the pots and every participating country at the 2019 African Cup of Nations can now start preparing the tactics and game styles to employ in maneuvering their group opponents by the time the ball gets rolling in Egypt come June.

Below, we will take a distinct look at these teams, their strengths, weaknesses, top stars and how much chance the Super Eagles stand against them.
Guinea: Guinea effortlessly picked up a group winner's ticket in the preliminary stages, beating heavyweights Ivory Coast along the way and on paper appear to be Nigeria's biggest threat in Group B.

The Sylie Nationale are gradually beginning to stamp some sort of authority on the continent and have reached the tournament quarter-finals in four recent editions (2004, 2006, 2008, 2015).

The likes of Naby Keita, Francois Kamano and Abdoulaye Sadio Diallo are enjoying fine seasons with their European clubs and will be expected to bring some special quality to this team in Egypt.

They are unbeaten in their last five competitive games, thanks to their steely approach to executing games and after scoring in all but one of their qualifiers will be reeking of confidence.

Burundi: Burundi are debutants at the 2019 AFCON and as such, are very much regarded as underdogs. But then, picking a runner-up ticket at the expense of a Pierre-Emerick Aubameyang-led Gabon is enough to massage their ego going up against the glamorous teams at the showpiece.

The Swallows do not boast of the same level of players in the ilk of Sadio Mane, Odion Ighalo, Mohammed Salah or Ahmed Musa all of who are expected to grace the tourney but the likes of Cedric Amissi, Saido Berahino and Abdul Rizal are passably tidy attackers on their days, all scuffs and awkwardness, and are punching above their weights and hitting unprecedented levels of productivity nonetheless (Razak ran Nigeria's Ighalo close in the top scorer prize during the qualifying rounds with six strikes).

Throw in the fact they conceded just five in qualification, one less than the likes of DR Congo, Angola and Nigeria and you have a defensively astute side there.

Madagascar: The Islanders will also be making their bow at the continental competition in June and are not expected to throw up much surprises.

Qualifying alongside Senegal in the first stages is no simple feat though and even recorded a morale-boosting 2-2 draw with the tournament favourites during that run. Clearly, one will observe they are well drilled footballing side.

They set up to play compactly in defence and hit their opponents swiftly on the counter.

They look defensively suspect having conceded eight goals enroute to qualification and do buckle under enough pressure as shown in the losses to Sudan and Senegal.