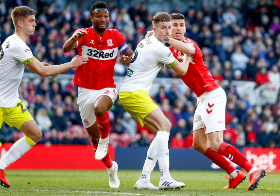 Middlesbrough are still in contention for the playoffs after beating Hull City 1-0 at the Riverside Stadium, their second successive win in the Championship with Obi Mikel captaining the side.
Twelve minutes from time and with the opponents probing in search of an equaliser, the Super Eagles midfielder was at the right place at the right time, clearing off the line after a scramble from a corner.
Speaking post-match, Mikel says he has enjoyed the captaining Middlesbrough in their last two matches against Bolton Wanderers and Hull City.
'''It is always nice to be the captain, to lead the team,'' Mikel told BBC's Matty Nixon.

''Great team, great players, great lads too, so it is always nice, it is always positive. I am really honored to have captained the team in the last two games.

''Hopefully we can keep winning games, I think that is the most important thing.''
In the provisional standings, Middlesbrough are seventh and have garnered 64 points from 42 matches, one less than sixth-placed Bristol City who have a game in hand.
Igho Kingsley
Photo Credit : mfc.co.uk