...the complete Nigerian football portal
Subscribe
Yobo On Ajax Win Vs Juventus : It's Not A Fluke, They Did It Against Real Madrid
Published: April 16, 2019 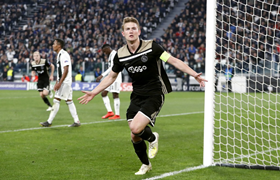 Dutch Eredivisie side Ajax Amsterdam pulled off another miracle by knocking Juventus out of the Champions League on Tuesday night, following their 2-1 win at the Allianz Stadium in Turin.

Cristiano Ronaldo headed home in the 28th minute to open the scoring, only for Donny van de Beek to equalise for the Dutch club six minutes later before Matthijs de Ligt got the winning goal on 67 minutes.

Former Nigeria captain Joseph Yobo has stressed that Ajax's win was not a fluke as they also eliminated the holders Real Madrid in the round of sixteen and he's backing them to go all the way to the final.

''They totally dominated the game, they came into this game with a total conviction they can have something from it, that they could win this game and it's not impossible,'' Yobo said in his post-match analysis on SuperSport.

''They are playing very well. Second half they had so many chances, I thought this game could have ended 3-1, they did everything they had to do.

''It's just a special and memorable Champions League moment for Ajax, kudos and big congratulations.''

The ex-Everton and Marseille defender added : ''It's 22 years since they qualified for the semifinals, this is very impressive, this team has done something that is very special. Now they are looking like one of the favorites. Can they get to the final, can they win the semifinal?

''If they continue the way they are playing, that conviction that whatever happens they could have their best in every game that they play.

''It's not just the goals, it is the performance, they actually dominated the second half.

''It is good to know that they have the mental strength because they were 1-0 down, they could have put their heads down but they stood up, they rose to the occasion.

''They delivered, they played, they believed in themselves, so much credit to this team, it's not a fluke.

''They did it against Real Madrid, they have done it again today, this is a special team.''

Following their win against The Bianconeri, Ajax will face the winner of Manchester City's clash with Tottenham Hotspur in the semifinals.