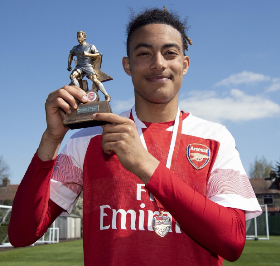 Allnigeriasoccer.com understands that the most talented player of Nigerian descent in the ranks of Arsenal U16s, Miguel Azeez, has agreed two new deals with Arsenal ahead of the 2019-2020 season.
The 16-year-old Azeez has penned a scholarship deal with the Gunners which will be activated on July 1, 2019.
The agreement will see him put pen to paper on a professional contract as soon as he turns 17 on September 20, 2019.
Miguel Azeez has been rewarded for his outstanding contribution to Arsenal U16s success this term, helping the young Gunners reach the final of the U16 Premier League Cup and winning the Liam Brady Cup.
An England U17 international, he was named as the Player of the Tournament in the Liam Brady Cup.
The central midfielder recently promoted the legendary Predator football boot along with David Beckham, Zinedine Zidane and Paul Pogba, and is in advanced talks to sign a big money deal with Adidas.
The precociously talented Azeez made his debut for Arsenal U18s in the U18 Premier League last season.
Ifeanyi Emmanuel
Photo Credit : arsenal.com