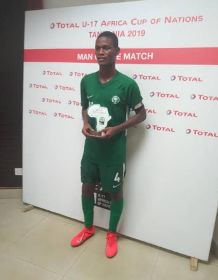 The Confederation of African Football has named Samson Tijani as the Man of the Match in Wednesday afternoon's encounter between the Golden Eaglets and Angola at the National Stadium in Dar Es Salaam.
Five-time world champions, Nigeria are on the brink of qualifying for the semifinal of the U17 Africa Cup of Nations following their hard fought 1-0 win vs Palanquinhas.
Tijani, who is captain of the Golden Eaglets, was selected for the award ahead of teammates Wisdom Ubani and Angola star player Zito Luvumbo, who trained with Manchester United in February and has been linked with a move to big Portuguese clubs in future.
The product of Collins Edwin SC helped goalkeeper Sunday Stephen to post a shutout in his first game in Tanzania, dropping back to help the defense and covered up the shortcomings of his teammates.
The likes of Monaco, Manchester City and Arsenal are monitoring the performance of Tijani at the U17 Africa Cup of Nations with a view to a transfer.
Akinkunmi Amoo had won the Man of the Match award in the Golden Eaglets opening fixture vs Tanzania three days ago.
Ifeanyi Emmanuel