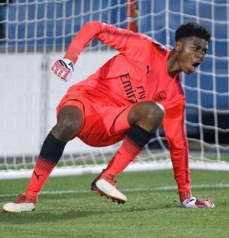 Highly-rated Arsenal goalkeeper Arthur Okonkwo would consider representing Nigeria at international level if he is approached by the Nigeria Football Federation, allnigeriasoccer.com understands.
Aged seventeen, Okonkwo is eligible to turn out for Nigeria through his parents and can commit his international future to the three-time African champions as he has not played competitively for England's senior side.
Regarded as one of the top teenage goalkeepers in England, he has caps for the Young Lions at U15, U16, U17 and U18 level.
The good news for the Nigeria Football Federation is that Okonkwo is not provisionally cap-tied to England despite racking up over ten appearances for their youth teams, meaning he does not need to request for a one-time change of association.
He has the needed qualities to play for Nigeria's Olympic National Team and the Super Eagles.
Okonkwo is eager to play first-team football next season and would be loaned out if his request is approved by Arsenal.
Although he was named in the Gunners traveling squad to Naples, he is unlikely to make his professional debut tonight.
Ifeanyi Emmanuel
Photo Credit : arsenal.com