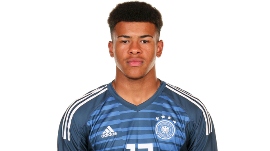 The German Football Association have announced the roster for the upcoming 2019 UEFA European Under-17 Championship taking place in Republic of Ireland, with two players of Nigerian descent making the cut.
SC Freiburg's Noah Atubolu is among the two goalkeepers in the 20-man squad, while FC Liefering's Karim Adeyemi is listed among the midfielders/attackers.
Atubolu was on the bench for the Germans in all their three group matches during the Elite Round qualifiers while Adeyemi started all the games, scoring twice against Belarus and Iceland.
The two youngsters were part of Germany's U16 setup before earning promotion to the U17s this season.
Germany have a tough-looking group, having been drawn against Spain, Italy and Austria, and will qualify for this year's FIFA U17 World Cup in Brazil if they finish among the top five teams of the U17 EURO.
Hannover 96 central defender Kevin Akpoguma played in the final of the 2012 U17 European Championship for Germany; Atubolu and Adeyemi hope to follow in his footsteps.
Ifeanyi Emmanuel
Photo Credit : dfb.de