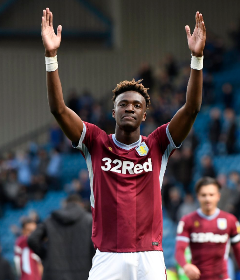 Round-up of the Nigeria-eligible players on target for their clubs in the English Football League on Friday, April 19.
At  Macron Stadium, Aston Villa brightened their playoff hopes by beating Bolton Wanderers 2-0. Chelsea loanee Tammy Abraham set up the opening goal in the 47th minute.
The England U21 star became the first Aston Villa player to score 25 league goals since 1977 when he headed home to double the advantage on 57 minutes.
Let's go to the Liberty Stadium. Swansea City won a seven-goal thriller by the odd goal against Rotherham United who had Semi Ajayi and Michael Ihiekwe in the starting line-up.
Ihiekwe broke the deadlock in the 10th minute, glancing home an inswinging cross from a teammate. It was his third goal of the season in all competitions.
In the League One, Coventry City recorded a 2-0 win vs Bradford City at the Ricoh Arena with Wolves loanee Bright Enobakhare netting his sixth goal in 12 games for the home team.
Enobakhare sealed the win with a late goal in the 88th minute and celebrated with a back flip.
Still in the division. Walsall snatched a draw against Southend United thanks to a 94th minute penalty scored by Queens Park Rangers loanee Aramide Oteh.
It was his maiden goal after ten games for the club he joined in the January transfer window.
In the League Two, Arsenal product Chuks Aneke struck in the 85th minute to help promotion hopefuls Milton Keynes Dons beat Notts County 2-1 at the Meadow Lane Stadium.
The number 10, who came off the bench on the hour mark, picked the ball up in his own half, knocked it past his defender before smashing past the goalkeeper.
Finally, former Tottenham Hotspur youth-teamer Emmanuel Sonupe bagged a brace for  Stevenage in their 4-1 win at Port Vale.
He fired into the top corner to make it 1-0 in the 12th minute before doubling the advantage four minutes after the interval.
Ifeanyi Emmanuel
Photo Credit : avfc.co.uk