...the complete Nigerian football portal
Subscribe
Stoke City Boss On Referee's Decision Not To Award Penalty After A Foul By Mikel
Published: April 19, 2019 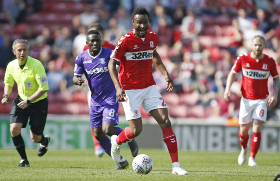 Stoke City had a strong penalty appeal turned down in their 1-0 loss to play-off chasing Middlesbrough on Good Friday.
Thirty four minutes into the contest, John Obi Mikel appeared to have clipped Sam Clucas in the area, but referee Darren Bond waved away the protests.
The Chelsea legend captained Boro for the third consecutive game and helped the Riverside Stadium outfit record their third win on the bounce and third consecutive shutout.
Stoke City manager Nathan Jones suggested that his side should have been awarded a penalty because Mikel clipped the midfielder before he went down in the box.
''The referee saw it differently to how I did but again even without a penalty we had enough chances today. If we just do our job then we win the game comfortably,'' said Jones to Stoke City's official website.

Boro's winning streak have put them in the race for the playoffs. They are sixth on the table with 67 points from 43 matches.
Igho Kingsley
Photo Credit : mfc.co.uk