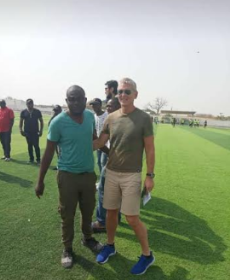 Two Swedish Allsvenskan clubs Hammarby IF and IFK Norrköping risk incurring the wrath of football's governing body, FIFA over their illegal signing of two Nigerian minors Akinkunmi Amoo and Ishaq Abdulrazaq, allnigeriasoccer.com can exclusively report.
One of the standout players for the current Golden Eaglets, Amoo is on the radar of clubs based in England, France and Austria but the interested teams have embarked on a wild goose chase as he has signed a preliminary contract with Hammarby IF.
Hammarby IF have reached a club-to-club agreement with Sidos FC Lagos for the attacking midfielder to join the Stockholm-based club.
They illegally signed Amoo and have put the papers in their own records to pull up when he turns 18 on June 7, 2020.
As for Abdulrazaq, the midfielder has confirmed himself that he penned a contract with IFK Norrköping, even before celebrating his sixteenth birthday, which is in violation of Article 19 of the FIFA Regulations on the Status and Transfer of Players under the age of 18.
It is confirmed that the former Nigeria U17 international signed a contract with IFK Norrköping more than a year ago after he was approached by a scout Torgeir Knutsen.
All paperwork has been signed, including club-to-club agreement between IFK Norrköping and Unity Academy, Kaduna, and the player's contract.
Stig Torbjornsen, a scout from Norrköping, was also in Nigeria to scout him before he was invited to Sweden in the last quarter of 2017.
It will be recalled that Atletico Madrid, Barcelona and Chelsea have been handed transfer bans for breaching transfer rules in relation to the signing of underage players, and the two Swedish clubs are in danger of being sanctioned by FIFA.
Ifeanyi Emmanuel