...the complete Nigerian football portal
Subscribe
The Deadly Goalscorer Golden Eaglets Are Searching For Is In Italy, Scores Against Juventus In Primavera
Published: April 23, 2019 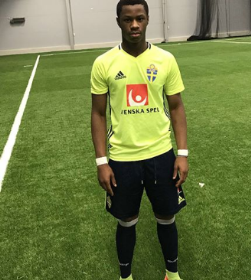 Emmanuel Ekong, who is the son of retired Nigeria international Prince Ikpe Ekong, is having an excellent season at Empoli youth teams and made his full debut for The Blues in the Primavera this past weekend.
Born in Italy on June 25, 2002, Ekong is eligible to represent the national teams of Nigeria, Sweden and his country of birth.
The Nigeria U17s at the ongoing U17 Africa Cup of Nations have created chances upon chances but have failed to convert most of them in their first three games, with Wisdom Ubani and Olakunle Olusegun the most guilty culprits.
There is no reason why coach Manu Garba should not make a move for the services of the highly-rated Emmanuel Ekong now that the Golden Eaglets are guaranteed participation in the 2019 World Cup.
Ekong shone as Empoli thrashed Juventus 5-0 in a Primavera clash on Sunday and the highlight of his performance was scoring his team's third goal two minutes before halftime.
The 16-year-old has been a key member of Empoli's U17 team this season, netting 6 goals in 21 games and scored twice against FC Nordsjaelland U19s in last month's Viareggio Cup.
Ifeanyi Emmanuel