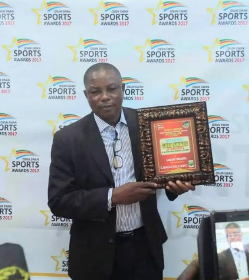 The former Sunshine Stars, Kwara United, Niger Tornadoes and Enyimba Coach has signed a contract with the firm which is expected to run between April 23, 2019 and April 22, 2021.

It has been agreed that Myron Topclass Sport Outfits will scout for potential clubs to engage the coach and see to all income producing activities ranging from image right, nickname, reputation among others.

The deal was signed few weeks after Lagos based Nationwide league Football Club, Gbagada FC also teamed up with the sports management professionals to join the likes of Sunsel FC, Right2Win Academy and a host of Nigerian League players.

Principal Officer of the firm, Mr. Eddie Iseri Ogbemudia said he was elated that the list keeps growing.

"The good thing is we are growing day after day which means more work for us, as they say reward for hard work is more work, we are quite happy and optimistic that there is more to come, we also hope that our partnership with Coach Unuanel will bring good tidings for both parties".

Coach Samson Unuanel on his part said "I have been following Myron Topclass Sport Outfits for sometime now and I must say they bring something unique to the football business, I like the way they promote their clients and expose them to opportunities and I'm happy to join them."