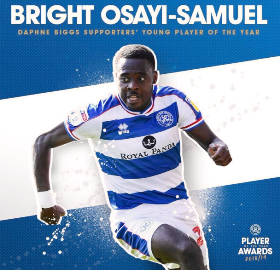 Okija-born winger Bright Osayi-Samuel has been named as Queens Park Rangers Young Player of the Year for the 2018-2019 season.
The former Blackpool starlet had been nominated for the accolade alongside Ebere Eze, Aramide Oteh, Ilias Chair, Osman Kakay and Paul Smyth.
He was presented with the award prior to kickoff against Nottingham Forest at Loftus Road on Saturday, April 27.
This season, Osayi-Samuel has made 33 appearances in all competitions for the Hoops, scoring in games against Wigan Athletic, Rotherham United and Bristol Rovers.
The 21-year-old arrived Queens Park Rangers on a three-year deal in the summer of 2017, ending a three-year association with Blackpool in the process.
Eze was shortlisted for the Goal of the Season for his brilliant strike against Aston Villa on January 1, 2019 but lost out to Luke Freeman.
Ifeanyi Emmanuel