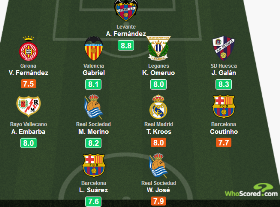 Chelsea loanee Kenneth Omeruo impressed in CD Leganes' goalless draw against Celta de Vigo on Saturday, April 27, and Whoscored.com took notice of his performance by including the central defender in the La Liga Team of the Week.
In a 4-4-2 formation, the Nigeria international partnered former Arsenal star Gabriel Paulista in central defense.
Omeruo was awarded a whoscored.com rating of 8.0 for his efforts against Celta de Vigo, just 0.1 less than Gabriel.
The 25-year-old was the highest rated player at the Municipal de Butarque last weekend, and racked up a game-high ten clearances, while he made one interception and one tackle over the course of ninety minutes.
Of the 22 players that started the game, the Nigerian had the best passing accuracy at 90.7 percent and won four aerial duels.
Omeruo's hot form for Leganes has him in contention to start for the Super Eagles in their Africa Cup of Nations opener against Burundi on June 22.
He has played 25 games in La Liga this season, logging 2,201 minutes.
Ifeanyi Emmanuel