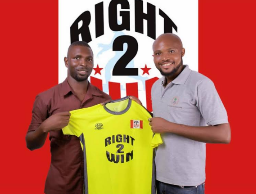 Right2Win Sports Academy have secured the services of Felix Ifeanyi Nwosu popularly referred to as Abacha as their new head coach.

Announcing the deal, President of Right2Win Academy, Engineer Kelechi Nnorom Orji confirmed that the coach has signed a one year deal with the Abia State based Outfit.

Engineer Kelechi Nnorom Orji said "We believe it's the right step to take and we believe we have appointed a man capable of overseeing the coaching affairs of the Academy, he has  a rich CV having being licensed by CAF, the FA, TikiTaka Sweden KNVB Netherlands and KISE Kenya which is good enough to earn him a job with us".

"I am very happy that It didn't take me too long to get another job after leaving Dream Stars Ladies and I want to use this opportunity to appreciate my managers Myron Topclass Sport Outfits, I hope I can make a mark here and make my stay with this great Academy count."

Coach Felix Ifeanyi Nwosu played professional Football in Nigeria and outside the shores of the country, he played for current Nigeria's Cup Champions Enugu Rangers, he also had a swell time with Kenyan Premier League sides Gor Mahia FC, Logo Ndogo, MOYAS FC and FC Talanta as a trainer, among others.