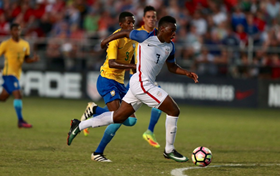 The Flying Eagles continue their U-20 World Cup preparations in earnest as the time draws ever closer to the Poland competition which is expected to throw up a couple of trivias.
Also, the Golden Eaglets, by virtue of their finish at the U-17 AFCON are expected to be amongst the participating teams in the cadet world cup competition in Brazil.
It is, of course no secret that these kind of youth competitions had gone on to launch the careers of most note-worthy stars of the game today.

While the United States U-20 team will be facing Nigeria in the group stages in Poland, their U-17s are also expected to navigate their CONCACAF qualification series to feature at the World Cup.

Information gathered from authentic sources have strongly indicated that the USMT have mapped out plans to feature some Nigeria-eligible lads at the tournaments and we will take a brief look at these players thus,

Chituru Odunze: Aged just 16, Odunze could be the lad who mans the sticks for the USA U-17s at World Cup. The Vancouver Whitecaps goalkeeper has impressed for the MLS club youth teams and has been tipped to break into the first team set-up when he attains maturity.

He is well known for his brilliance in one-versus-one duels and incredible build and height at such a tender age gives him a great advantage in aerial battles.

Jonathan Amon: Amon's incredible rise to prominence with FC Nordsjaelland has earned him a lot of praise from both his club manager and country handler, Tabare Ramos and is one player that the United States faithfuls are longing to see strutting his stuff in Poland.

The fleet-footed winger has been described as a menace to watch when taking on opposing defences and would surely pose a couple of problems for Nigeria in their second group game in Poland if he is utilized.


Ayo Akinola: Ayo is another Nigeria-eligible player who could be on his way to the U-20 World Cup with the United States.
The Toronto FC striker posses the required skills to trouble defenders as he has shown with the club this season, of which has not escaped the notice of the country's youth handlers.
Blessed with blinding pace and the ability to find goals in the meanest of situations, the 19-year-old could be one of the players to watch in Poland.


It is understood he has set his sights at turning out with the United States at the World Cup this year though his senior future is still covered in mist.
Emmanuel Chinaza
Photo Credit : ussoccer.com