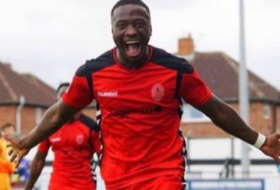 According to information gathered by allnigeriasoccer.com, Nigerian-born striker Daniel Udoh is attracting huge interest from English Football League clubs ahead of the reopening of the summer transfer window.
The 22-year-old frontman had his most successful season as a footballer this term, netting 26 goals from 46 appearances in all competitions, which has put him in the shop window.
It is understood that Udoh's agent has held positive talks with Shrewsbury Town, Walsall, Morecambe F.C and some unnamed National League clubs over a deal.
Born in Ojuelegba, Surulere in Lagos, Daniel Udoh is eligible to play for the national teams of England, Nigeria and Togo.
He has opted not to renew his contract with non-leaguers AFC Telford United and he's expected to make a decision on his future at the end of this month.
Udoh wore the jerseys of Luton Town, Stevenage, Worcester City,  Crewe Alexandra, Solihull Moors, Halesowen Town, Chester and Leamington prior to his transfer to AFC Telford United in the summer of 2018.
The former Nigeria U17 invitee trained with the likes of Kelechi Iheanacho, Taiwo Awoniyi and Isaac Success prior to the 2013 FIFA Under 17 World Cup in the United Arab Emirates.
Ifeanyi Emmanuel