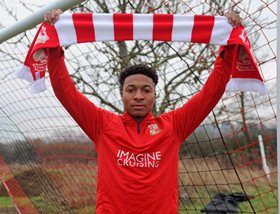 Through their official website,  English Football League Two club Swindon Town have confirmed their retained and released list following the end of their 2018-2019 campaign.
Highly-rated Nigerian left back Ali Koiki is among the six players returning to their parent clubs.
Aged nineteen, he was loaned out by Burnley to Swindon Town in the January transfer window to improve his chances of first-team football.
He started 13 out of a possible 19 games in the English fourth-tier, came off the bench in two matches and was a non-playing substitute against Colchester United in March.
Koiki is highly regarded at The Clarets and has been tipped to make his first-team debut in the not too distant future, having made the bench for Premier League games against Arsenal and West Ham this season.
He spent his formative years as a footballer with the youth team of Crystal Palace.
Ifeanyi Emmanuel
Photo Credit : swindontownfc.co.uk