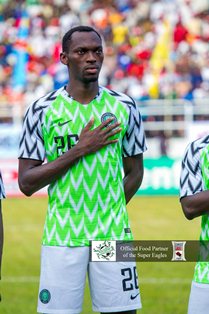 Three Nigerian players who have played for the senior national team were on target for their respective European clubs in league matches on Saturday, May 11.
In the Turkish Super Lig, Umar Aminu was among four Nigerians named in the starting line-up for Rizespor's 3-2 loss to Galatasaray at the çaykur Didi Stadyumu, the others being Azubuike Okechukwu, Chidozie Awaziem and Henry Onyekuru.
Sofiane Feghouli netted a sublime effort to open the scoring in the 9th minute after a delightful pass from Onyekuru and Aminu made it 2-1 Rizespor in the 76th minute for his sixth goal of the season.
In the Italian Serie B, Crotone finished the season in 12th place thanks to their 3-0 rout of Ascoli at  Stadio Ezio Scida.
Simeon Tochukwu Nwankwo was directly involved in 19 goals from 33 games this term after scoring and providing an assist in today's fixture.
Finally, Victor Osimhen helped Sporting Charleroi secure a 3-0 win against Beerschot-Wilrijk at the Olympisch Stadion (Antwerp) by scoring in the 25th minute.
The Dream Team VII star has now netted 16 goals in the league, level with FC Midtjylland's Paul Onuachu.
Ifeanyi Emmanuel