...the complete Nigerian football portal
Subscribe
Liverpool Loanee Awoniyi Gets His Groove Back With Second Goal In Consecutive Matches
Published: May 11, 2019 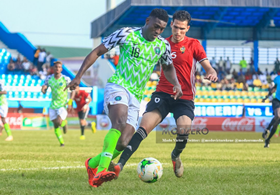 Taiwo Awoniyi scored his second goal in consecutive league games as Royal Excel Mouscron and Union St.-Gilloise shared the spoils in a six-goal thriller at the Stade Joseph Mariën (Brussels) on Saturday evening.
The Nigeria U23 international had not scored for four Belgian First Division A league games before he broke that poor run in front of goal against Zulte-Waregem last weekend.
Two minutes before half-time, Awoniyi received a pass from Amallah and beat goalkeeper Kristiansen with a shot on the turn to make it 2-1.
Today's goal was the Liverpool loanee's ninth in the Belgian top flight since re-joining Royal Excel Mouscron in the January transfer window.
In terms of goals, this has been Awoniyi's most successful season as a professional, with 12 goals to his name in all competitions, beating his previous mark of 10 in the 2017-2018 campaign.
Awoniyi rediscovering his scoring boots is good news for Nigeria U23 coach Imama Amapakabo ahead of the Olympic Games qualifying matches vs Sudan next month.
Ifeanyi Emmanuel