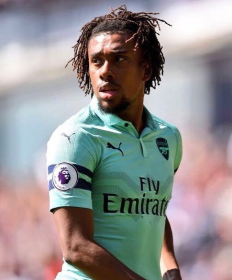 Alex Iwobi came close to matching a Nigerian record for the highest number of assists in a single season as Arsenal beat Burnley 3-1 on the final day of the 2018-2019 campaign on Sunday, May 12.
He provided the assists for the goals scored by Pierre-Emerick Aubameyang and Eddie Nketiah, taking his total to six in the league this term.
The Hale End Academy product set a new personal best of 6 assists, surpassing his previous best of five which he achieved in the 2017-2018 campaign.
Former West Brom striker Peter Odemwingie ended the 2010-2011 campaign with seven assists, which still stands as a Nigerian record to this day.
In the last three seasons, Iwobi has been the Nigerian king of assists in the Premier League, as he also tallied the most assists in the 2017-2018 and 2016-2017 campaign with five and three respectively
Only Frenchman Alexandre Lacazette, with eight assists, set up more goals for Arsenal than Iwobi this term.
Ifeanyi Emmanuel
Photo Credit : arsenal.com