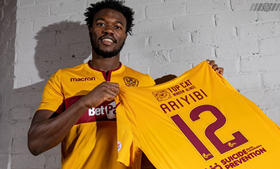 EFL Championship club Nottingham Forest have confirmed their retained and released list following the conclusion of the 2018-2019 season.
It is looking likely that American-born winger of Nigerian parentage, Gboly Ariyibi will not be extending his stay at Scottish Premiership side Motherwell, with The Reds announcing on Monday that he's one of the first team players contracted beyond June 2019.
The former United States U23 star has made 16 appearances for Motherwell since joining the club in the January transfer window, scoring two goals.
His last official game for Motherwell could be against Livingston this coming Saturday, May 18.
The 24-year-old has yet to play a competitive game for Nottingham Forest's first team but has taken in loan spells at Milton Keynes Dons and Northampton Town.
A product of the famed Southampton Academy, Ariyibi also lists Leeds United, Tranmere Rovers and Chesterfield as his previous clubs.
Ifeanyi Emmanuel
Photo Credit : motherwellfc.co.uk