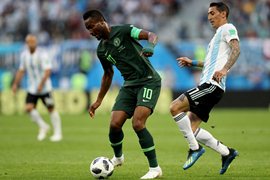 Chelsea legend John Obi Mikel, who has not played for the Nigeria National Team since last year's World Cup, could return to the Super Eagles for the Africa Cup of Nations in Egypt.
The central midfielder had been on a sabbatical as he wanted to focus on his career with Middlesbrough and struggled with injuries in his final year in China with Tianjin Teda.
Nigeria are returning to the Africa Cup of Nations after they failed to qualify for the last two editions.
Since making his international debut against Libya fourteen years ago, Mikel has earned 85 caps for the Super Eagles, scoring six goals.
Manager Gernot Rohr has visited England and held positive talks with his skipper about returning to the squad.
Mikel has featured for Nigeria at the Africa Cup of Nations in four tournaments - 2006, 2008, 2010 and 2013.
Ifeanyi Emmanuel
Photo Credit : thenff.com