...the complete Nigerian football portal
Subscribe
Rohr Wins The Battle For Chukwueze's Services Plus Four Other Takeaways From Provisional AFCON Squad
Published: May 15, 2019 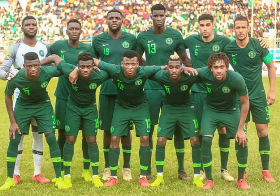 Gernot Rohr's provisional squad list for the upcoming AFCON competition scheduled to take place between June 21 and July 19 in Egypt was unveiled on Tuesday evening.

The Super Eagles gaffer has invited 25 players to camp, while six have been placed on standby.

After a critical look at the list, allnigeriasoccer.com has come up with top five talking points:

The Benfica left-back was injured prior to the start of the season and he's yet to play a single game for his Portuguese team this season.

Though he has resumed training, it seems it was too late to convince Rohr of his fitness level as he wasn't included on the list

Iheanacho Has Another Chance To Impress

Leicester City striker Kelechi Iheanacho is lucky to have made the list considering his performance for his Premier League side during the just concluded season.

He has been given another chance to impress Rohr and his backroom staff, and he must grab this opportunity with both hands or he will risk being left out of the final list.

The Russian-based defender was one of the first names on Rohr's list during Russia 2018 World Cup but he's unfortunately lost his place in the team after the world's greatest football fiesta.

He is only good for the standby list, meaning his chances of traveling to Egypt largely rely on injury to the fullbacks in the provisional squad

There was a great competition between the Super Eagles manager  and Flying Eagles head coach Paul Aigbogun over Samuel Chukwueze's services as both managers wanted him in their respective team.

This list is a confirmation that Rohr has won the battle and he will expect the young Villarreal forward to live up to his billing in Egypt.

Super Eagles Most Influential Star Mikel Obi Is Back

Mikel Obi's inclusion in the list is a confirmation that Rohr's reported discussions with the player went smoothly.

The midfielder has been absent from the team since June last year, but he's expected to report for international duty next month.

His experience and quality will be needed by the West African side if they must win their fourth AFCON glory come 19th of July.

Rohr is expected to unveil his final list on or before 10th of next month.