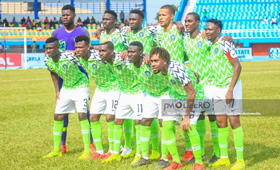 Super Eagles manager Gernot Rohr on Tuesday, May 15th unveiled a 25-man roster which will begin preparations for next month's Africa Cup of Nations tournament and while he had largely kept faith with the host of players that earned the ticket to the finals, a handful of them will still have a lot to do in justifying their inclusion, for varying reasons.

The list will still be pruned to 23 after the training camp in Asaba but which of these ones have the biggest point to prove to the faithfuls?

Kelechi Iheanacho: Coming off the back of a nondescript season with Leicester City, Iheanacho will surely be thanking his stars now, with Rohr who has been very critical of him still keeping faith nonetheless.

While he had failed to put up little fight in dislodging Jamie Vardy from the striker position at the King Power, it's really hard to see how the U-17 World Cup winner will trouble free-scoring strikers, the likes of Odion Ighalo, Paul Onuachu or Henry Onyekuru.

Leon Balogun: While his dependability in green has never been in doubt, their is a sense that his bit-part role for Brighton in the Premier League was becoming all the more worrisome.

Balogun, thus will have the task of working his socks off yet again in training sessions and the friendlies to convince the team handlers of his readiness or risk losing his spot to Kenneth Omeruo who has done inestimably well for Leganes this season.

Obi Mikel: The Chelsea legend remain one of the most experienced players on the roll call but the team's skipper who has not been with the group since their elimination in the World Cup last year will have the honour of proving his quality yet again.

His availability will be heart-warming, particularly as a result of the composure he brings to the national team's midfield when he is playing.

But can the veteran replicate the dazzling form we saw him churn out for Middlesbrough last season when he gets to add to his 85 international caps in Egypt, an edition which is viewed as his swansong?

Francis Uzoho: Uzoho's inactivity in Cyprus lands him straight on this list and his condition is just as precarious.

The youngster has played few games for Anorthosis Famagusta, prompting his national team manager to send a goalkeeper trainer to work with him at a point.


While he has shown the callowness of youth in some cases, with the latest coming in his last outing in March, will his match rustiness yet again prove a sticking point if he maintains his position as the first choice goaltender?
Emmanuel Chinaza