...the complete Nigerian football portal
Subscribe
'No Need To Speak On Chelsea's Pedigree' - Revs' Nigerian Defender Excited To Face One Of The Best
Published: May 15, 2019 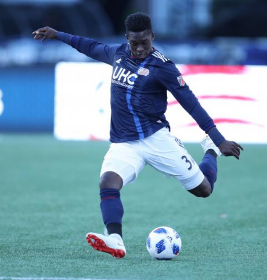 New England Revolution's American-born Nigerian defender Jalil Anibaba is relishing the prospect of facing Chelsea in Wednesday evening's charity game dubbed 'Final Whistle On Hate'.
Anibaba explained that the match is significant because it will help to create awareness in the fight against racism and discrimination.
''Yeah great. Obviously there is no need to speak on Chelsea's pedigree, everybody around the world knows,'' Anibaba told New England Revolution's official webpage.
''To hold this matches is great for the awareness of the game throughout, not only the MLS, not only throughout the country but throughout the world.

''Everybody is really excited, ready to get out there and showcase what we can do and also help to build the football culture in America.''
The defender added : ''I am looking forward to just playing, I am looking forward to going into the squad, my brother is a Chelsea fan so he'll be really excited to see what they do and how we match up.''
Anibaba respects ex-Super Eagles star Jay Jay Okocha because of his dribbling abilities and loves to watch the Nigeria National Team because of his heritage.
Ifeanyi Emmanuel
Photo Credit : revolutionsoccer.net