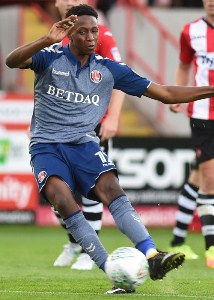 Premier League champions Manchester City have joined Arsenal in the race to land the signature of talented Nigerian midfielder Joe Aribo in the summer transfer window, according to reports.
The Daily Mail is reporting that The Citizens have made enquiries about Charlton Athletic's Aribo who becomes a free agent at the end of next month if he does not prolong his stay at the Addicks.
The left-footed midfielder has told allnigeriasoccer.com that he models his game after former Tottenham Hotspur star Moussa Dembélé, but has been likened to Arsenal legend Patrick Vieira by ex-Charlton manager Karl Robinson.

Several clubs are keeping close tabs on Aribo, with Southampton, Celtic, Rangers and French club Rennes among his suitors, according to goal.com.
It appears Charlton Athletic have failed in their bid to extend the contract of the 22-year-old and are resigned to losing the player whether or not they are promoted to the Championship via the playoffs.
Aribo has scored in each of his last four games for Charlton, taking his tally for the season to 10 goals in 37 appearances.
Ifeanyi Emmanuel
Photo Credit : cafc.co.uk