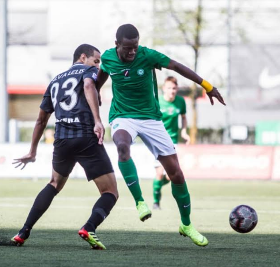 Allnigeriasoccer.com understands that a plethora of European clubs are keeping tabs on 2015 U17 World Cup-winning defender Lukman Zakari ahead of a potential transfer in the summer transfer window.
The FK Metta starlet has been in impressive form since the start of the 2019 season and was named to the Virsliga Team of the Week for the last round of matches in the division.
He was the best player on parade at the Hanzas vidusskolas laukums as Metta defeated Ventspils 2-1 on Sunday.
A scout representing Atlético de Madrid has watched Zakari this season and he would join the B team of the Spanish giants if a transfer materializes.
FC St. Gallen chief scout Nnamdi Aghanya, who is a Nigerian, is monitoring the progress of the center back with a view to a transfer.
The 20-year-old has been proposed to Belgian clubs KAA Gent and Standard Liege and is being watched by
KS Cracovia and Slask Wroclaw in Poland.
Zakari could be considered for a call-up to the Dream Team VII for the U23 Africa Cup of Nations qualifiers against Sudan in September, if he continues to post impressive performances.
Ifeanyi Emmanuel