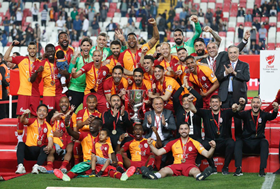 Henry Onyekuru, on Wednesday evening got his first taste of silverware with Turkish powerhouse Galatasaray after helping them to beat Akhisarspor 3-1 in the final of the Turkish Cup.
The Everton loanee started and went the distance at the Yeni Sivas 4Eylul Stadyumu though he could not add to his two strikes in the cup competition.

Galatasaray have a great chance of doing the double this season by capping off a fine campaign with yet the Super Lig  title as they are tied on points with Istanbul Basaksehir ahead of their meeting next time out, a tournament in which the Nigerian has been instrumental to having found the back of the net thirteen times in 29 league games.

Onyekuru who is coming off the back one of his most productive seasons is expected to light up the Afcon tournament with his blistering skills and eye for goal and has already earned himself a spot on Nigeria's provisional roster.

Since he turned professional with AS Eupen back in 2015, this is his second career title, to go with the Belgian Super Cup he won with Anderlecht last season.

Sinan Gumus, Sofiane Feghouli and Mbaye Niang were all on target for Gala in the victory.